Although Kilts are associated with Scotland, Ireland also has its fair share of this tradition. Kilts are to this day still worn in both Scotland and Ireland. In this article, we are going to talk about the Irish kilt vs. Scottish kilt. No matter how many differences and similarities lie in the kilts of these countries one thing is evitable, that is the Kilts have been a symbol of pride and glory in both Ireland and Scotland. If you want to buy the kilt that suites your needs and is worthy of your spent money then keep reading and learn it all!

The history of both Irish and Scottish kilt deeply adheres to the present status of these kilts. Here is how the Kilts were originated in both countries:

As per several native historians, the initial version of the Irish kilt is known as Lein-crotch. The kilt was tunic designed with block color. It is also believed that it’s not the traditional kilt. Saffron Kilt is mostly referred to as the traditional Irish kilt.  The saffron kilt comes with the shamrock applique down its pleats.

The kilts were first worn by the members of the military in the 20th century. These days, the kilt trend is on the rise in Ireland.

Scottish kilts were first worn in the sixteenth century. It was initially called as Feileadh Mor. The kilts were made of woolen fabric and were created due to the cold weather condition of the country. In the 19th century, the Kilt became the symbol of identity in the country and a part of the native’s traditional outfit.

Without accessories no kilt is complete. Both Irish and Scottish natives prefer accessorizing the kilts. Here are some of the decorations one can wear the kilt:

Sporrans are the pocket adhered to the front of the kilt. When it comes to the sporrans there is not much difference. However, some Irish sporrans come with green details and shamrocks whereas the Scottish sporrans have Celtic detailing.

Crests are important in Scottish culture it symbolizes unity and acceptance whereas the Irish culture, the crest is not commonly pinned.

Both Irish and Scotts wear knee-length socks with stitched ribbons on them. The shoes that they wear are known as ghillies (Black for Irish and cream-colored for the scots). 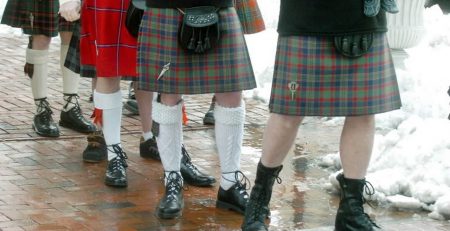 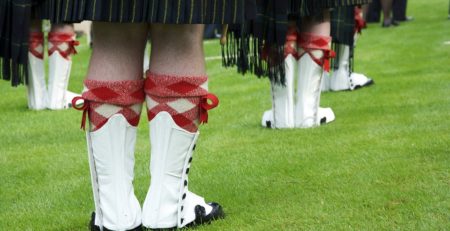 As we all know that kilts are only perceived as a mini skirt if not worn with the sporrans.... read more